North Claiborne Avenue at the intersection of Ursulines and Claiborne, 1947. (Source)

IF YOU WERE STANDING at the intersection of Ursulines and North Claiborne in 1947, the intersection at which the above photo was taken, you'd be struck by a few things. Clocking in at 191-feet across, you'd notice that the sheer width of the street is breathtaking. You'd notice how Claiborne's massive neutral ground – a local term for what folks in the US generally call a "median" – is lined by a row of live oak trees, verdant and generously shaded. And you'd notice the children playing baseball in this de facto public park, while drugstores, car repair shops, and groceries ushered patrons along.

In New Orleans, North Claiborne Avenue has long been a bustling hub of Black business and local African American culture, even being compared to Tulsa's Black Wall Street. North Claiborne remains a popular gathering spot during second line parades, but the space itself has been fundentally altered. In 1966, construction began on the I-10 expressway, which demolished the live oaks and the neutral ground that had been central to the character of the Claiborne Avenue business district, erecting instead the snaking leviathan of concrete that remains to this day.

What was life like on North Claiborne during the first half of the 20th century? What kinds of Black businesses operated, and where were they? Through the use of Sanborn maps, this project highlights Black life and business on North Claiborne's commercial corridor.

The painted pillars underneath I-10. (Source) 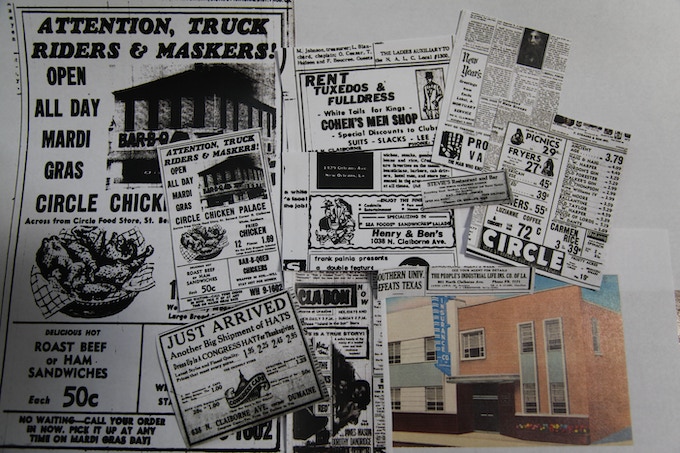